There is an alarming trend in today’s society. Obesity, at least in the United States, is quickly reaching epidemic proportions. This is tragic not only for us, but for our children. We can no longer deny it; our children are getting fatter every year. In some areas of the country up to 40 percent of the children are obese or extremely overweight, many before the age of 6. Doctors across the nation continue to report dangerously high blood pressure and severe vascular changes in even the youngest age category.

Children as young as 4 had abnormally high insulin levels (a risk factor for diabetes); and 13 percent of children showed high cholesterol levels. One report found that more than 10 percent of U.S. children 2 through 5 years old are already overweight. By age 10 many of these children will have become obese, with early symptoms of diabetes.

These youngsters do not outgrow their obesity—it grows with them. Recent research suggests that obese teenagers have a dramatically increased risk of dying by the time they reach middle age. One study found that overweight teenagers had a mortality rate 30 to 40 times higher than teens of normal weight. And can you guess the average age of death for adults who were obese as adolescents? Children in the study, who were obese as teens, died as adults at the average age of 46.

What are the consequences of kids packing on those extra pounds? Here are a few:

Social and economic. Obese children in their late teens and early 20s tend to have fewer social connections and less money.

Diabetes. Until recently, type 2 diabetes was rare in kids. Now it accounts for 40 to 50 percent of the diabetes among children.

Cancer. Overweight children are at increased risk of various cancers later in life. According to one study, the risk of adult cancer increased by 9 percent for every standard increment in childhood body mass (BMI).

Other serious consequences include increased bariatric surgery, liver damage, and orthopedic consequences from the extra stress on the knees and feet.

How have we collectively gotten into this mess? A few of the more prominent reasons include supersized portions of fatty and sugary foods. Add to that increased fast food and soda pop consumption, coupled with a reduction of family meals. Children do not eat healthful breakfasts as they once did, and often rely on unhealthful choices at schools to satisfy their hunger. They feast on burgers, hot dogs, fries, chips, soda, and candy instead of more wholesome choices.

Finally, hectic schedules, sleep deprivation, and leisure time activities such as TV and video games that reduce or eliminate exercise are causing kids to pack on pounds—and trouble—at an unprecedented rate. All too often such children are mimicking the poor habits of their parents, and suffering the same consequences—only sooner.

How can this terrible trend be reversed? Simple changes can make a big difference over time. Here are a few tips:

• Less TV and no eating in front of the TV

• Less fast food on the run

• Walking as a family before supper, and increasing family exercise in general

Changing long-held family eating and lifestyle habits requires not only parental involvement but parental discipline (without scolding and censure). Often, busy parents feel loath to restrict what their children eat because they feel guilty for working so much.  But keep this in mind if you want to make a lifelong impact on your child’s nutritional habits, by starting to teach and model good habits as early as possible, you can spare your child from countless diseases for many years to come. 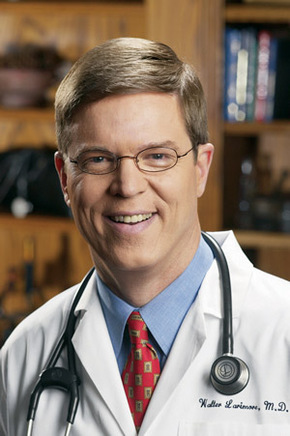 Dr. Larimore completed his Residency in Family Medicine at Duke University Medical Center in 1981 and completed a General Practice Teaching Fellowship at Queen's Hospital in Nottingham, England in 1978. Dr. Larimore is Board Certified and re-certified (four times) by the American Board of Family Medicine and has been awarded the Certificate of Added Qualification in Sports Medicine by the ABFM. Dr. Larimore is a prolific author and has written, co-written, or edited thirty books, thirty medical textbook chapters, and nearly 700 articles in a variety of medical journals and lay magazines.

How Food Affects Your Brain