Summer 2018 has arrived! I took a peek at the U.S. temperature map and it showed the common temperature throughout the country to be a pretty warm 90˚F. Where I am in central California, the days are quickly getting hotter and hotter, which I appreciate for outdoor activities that sunlight brings, but it also gets me thinking: Am I getting enough water?

Receiving the proper amount of water is important all year long, but during the spring and summer months, we tend to spend more time outdoors while on vacation, gardening, picnicking, and on outdoor adventures. While it’s true that during we can also overlook our need for water during winter months because we feel cool and don’t realize that our bodies need a drink, summer months tend to be such a flurry of activity that we simply push the thought of drinking water out of our minds.

So, here’s a gentle reminder: Don’t forget to drink water, especially when you’re splashing in the pool, gardening, going for a run. The body uses the system of sweat to keep our body temperature regulated, but when we sweat off our water content, the body can no longer regulate well, and that’s when we begin to suffer from dehydration.

Our need for water will always be there, so making a habit of hydrating will ensure we don’t neglect the all-important cells that 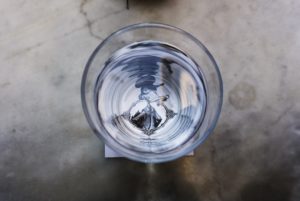 make up our bodies. When I wake up, I have a habit of drinking water before I even get out of my bed. A well-hydrated system pairs perfectly with a well-rested body so starting the day off with a glass of water or two can make you feel 100% ready for the start of your day.

Another constant battle that our poor cells are always fighting is our habit of replacing much-needed water with water-replacements like coffee, sugary tea, juice, and soda. You can argue that these drinks may have some benefits, but not without its correlated detriments. Coffee is a major problem because it’s most people’s morning drink of choice. The total package of water is beneficial to our bodies, whereas coffee messes with digestion, sleep pattern, and hydration.

It starts when we’re young

When I was a kid, there were so many drinks that were being popularized on TV. Kool-
Aid, Capri Sun, Gatorade, and others were marketed as being the drinks to drink during the summer. Obviously, there was no discussion about the drinks’ shockingly high sugar content.

A 12-ounce soda contains 36 grams of sugar on average, which is more than half a typical American adult’s recommended intake. The other drinks have around half that amount, which is significant because of the other sugar-filled foods that children typically consume during summer months, like ice cream, popsicles, and candy.

This is important for us as adults to take note of, as rising obesity rates in children have recently been linked to higher cancer risks later in life. It’s incredibly important to begin cutting sugar out of our children’s beverages right now.

Here’s a tip: Always carry water with you

Frequently, the excuse for not drinking enough water is, “I don’t have any with me.” So, keep a glass of water on your nightstand so you can drink it first thing in the morning. There are countless varieties of convenient, stylish, and insulated water bottles that are widely available at stores. 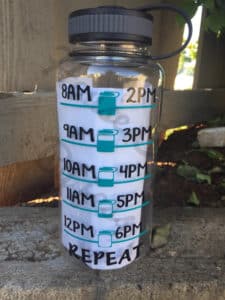 Insulated water bottles can keep water cool when left in a warm car so that wherever you go you have ice-cold water on hand. I recently started taking an enormous insulated bottle everywhere with me so that I don’t become dehydrated.

Another clever idea is to get a large clear reusable water bottle and draw lines on the side indicating each cup’s worth of water. That way, you can visibly see how much water you’ve been drinking throughout the day and start making it a goal to drink a certain amount by a certain time.

Most people think that being dehydrated isn’t something to be very concerned about. It’s easy to think that – if your lips are chapped and your throat is a little dry, you can just take a sip of water and be done with your “dehydration.” But dehydration is serious – it’s long-term effects can even lead to kidney failure, seizures, and brain swelling. In the short term, too, if you’re doing something strenuous in warm conditions without water, your life could be in danger.

Last summer in the southern part of the Serra Nevada Mountains, someone close to me had taken a trip high into an arid part of the mountains. My friend hadn’t planned to walk very far so he didn’t bring a lot of water with him. When my friend started their hike, he happened to run into a friend who was just going on a drive but ended up joining my friend on the hike.

They hiked down the mountain and around valleys, sightsaw, and watched the wildlife in the beautiful mountains; both were unaware of how far their downward hike had taken them. When they finally noticed the heat and thirst and turned back, they were down to the very last of the water, which they shared. The effects of dehydration caused muscle fatigue, then cramps and headache, dizziness, and slight confusion about where they were.

I’m so relieved that both of them made it back up the mountain safely, but this has forever been a lesson to me during the times I, too, found myself in a similar situation.

So take this as my friendly but sincere reminder to you: please prioritize water this summer. Whether you’re studying in class, sitting at work, going on a bike ride, or running – your entire body, from your kidneys to your brain, requires water. No matter where you go or what you do, your body will need water, so please take care of it.

Activated Charcoal In The 21st Century: How It Works And How It's Used

A Plant-Based Solution To The Alarming Diabetes Epidemic