The American Institute for Cancer Research

analyzed how consuming meat affects the risk of developing cancer. Animal foods include animal flesh and foods that are produced by animals (like eggs and dairy). So if people have eaten meat for all of history, why is an epidemic of cancer that is happening now being attributed to a food (ie. meat) that has been eat for all of history without an epidemic of cancer following it.

Well, there are a few reasons. One is that we eat a lot more meat than our ancestors. Also, animal meats are often processed before consumption by smoking and curing, which involves adding preservatives like nitrates. Our ancestors made cured meats using salt and spices and cured meat as a way to preserve it. But over that last one hundred years, food manufacturers shifted to curing with sodium nitrate and potassium nitrate (as well as salt) when they discovered that nitrates preserve better than salt but also makes the meat stay red, enhancing the appearance for a long time. These nitrates and other chemicals (which our ancestors never used) are now being used to create cured meats just for taste, appearance and for cultural reasons–obviously not for preservation reasons since we all have fridges.

If the chemicals in cured meats isn’t enough, we give our livestock medicine like antibiotics and hormones during the the growth process and that also becomes part of our food supply. We give them hormones to speed up and maximize their growth and then we give them antibiotics so that they won’t get sick when we pack them into large feed lots and trucks prior to butchering them.

And then on top of it, meat and fish are cooked at high temperatures during frying, grilling, boiling, or barbecuing. By cooking meats at high temperatures, it results in the formation of heterocyclic amines and polycyclic aromatic hydrocarbons (PAH). Astonishingly, both chemical structures are linked to the development of colorectal cancer. Red meat has high heme iron, which stimulates colorectal carcinogenesis (the process that turns normal cells into cancer cells). Heme iron stimulates the endogenous formation of carcinogenic N-nitroso compounds. When meat is burnt incompletely, polycyclic aromatic hydrocarbons are formed. These specific hydrocarbons have carcinogenic potential. In plain English, when cooking meat, cancer causing carcinogens come from fat dropping off the cooking meat contacting the flames and sticking to the surface of the food.

These methods of production and preparation can change the chemical composition of meat. The Institute for Cancer Research concluded that red meat and processed meat increases the risk of colorectal cancer, and Cantonese-style salted fish increases the risk of nasopharyngeal cancer. Another study found evidence that indicates that dairy consumption leads to a higher risk of prostate cancer. With all the scientific evidence stacking up, it’s not hard to see how eating animal products might increase the risk of cancer in some individuals.

Who would have thought that food could affect our bodies in this way?

The extra danger in processed meat

Processed meat (literally means any meat that isn’t fresh and includes meats like beef jerky, chicken nuggets, canned meats, hot dogs, sausages, and deli meats) is rich in fat, protein, and heme iron, which sparks tumorigenesis through the same mechanisms mentioned above. Since processed meat is so much higher in fat content, it leads to carcinogenesis through the synthesis of secondary bile acids as well. It is almost unfathomable just how greatly processed meat hurts our bodies and helps cancer to grow.

It’s shocking to think that cancer can be preventable, isn’t it? Sure, genetics plays a role there are people who eat meat, smoke and drink alcohol all of their lives and live to 100 with barely an illness and some people are vegans their whole life and die of cancer. But those are the exceptions, not the rule. Science is finding that lifestyle is the one contributing factor that is within your control that can lead you to have a healthy life.

Scientists and health providers are realizing the only way to beat this trend is to change society’s lifestyle practices. Who would have thought that lifestyle could alter cancer’s effect? Could this be a key to stopping cancer’s destructive pathway? 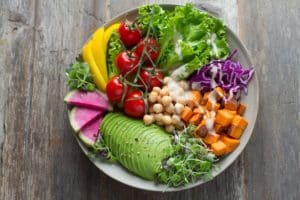 We spoke about many foods that increase the risk of cancer, but what foods decrease the risk for cancer or prevent it altogether? A high-fiber, plant-based diet is the solution to preventing cancer. This diet includes foods like grains, legumes, fruits, and vegetables. These plant-based foods protect against the risk of all forms of cancer caused by meat and can even protect against breast cancer. The World Cancer Research Fund (WCRF) recommends the whole, planted-based foods as a solution to prevent cancer. Maybe giving those foods we find less desirable, like vegetables and fruit, a “shot” and decrease the risk of cancer.

Diet Secrets of the Gladiators

The Right Way To Use Charcoal Toothpaste