The general definition of a “plant-based diet” means eating fruits, vegetables, whole grains, legumes, nuts and seeds and avoiding animal products like dairy, eggs, meat, and seafood. Some might define it as having minimal animal products, but it really depends on where you are in your health journey and what you’d like to work towards. 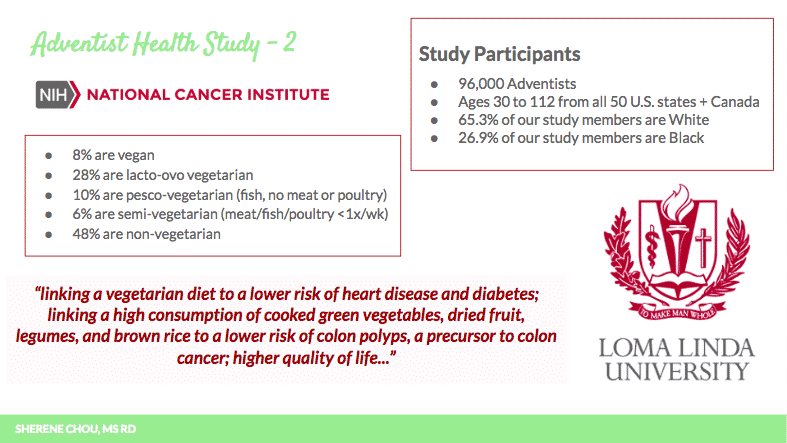 The benefits of a plant-based diet are based on the Adventist Health Study, which included over 96,000 Seventh-day Adventists, ages 30 to 112, from all fifty states and from Canada. About 8% were vegan, 20% were lacto-ovo vegetarian, which means they don’t eat meat but do eat dairy and eggs. 10% were pesco-vegetarian, a diet which includes fish but excludes meat and poultry, and 48% were non-vegetarian, which basically means they ate meat. 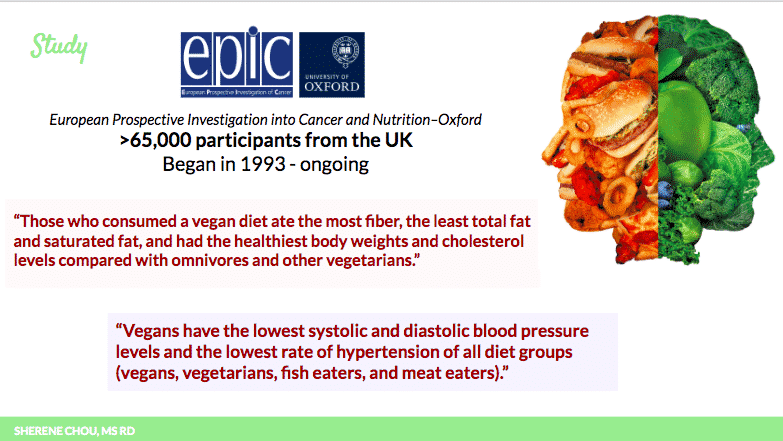 Another well-known study is the EPIC study, or the European Prospective Investigation into Cancer and Nutrition at the University of Oxford. About 65,000 participants from the UK were enrolled in the study in 1993 and it continues on even today.

Are there benefits beyond health?

Beyond all of these health benefits, is there also a relationship between the dietary pattern we choose and food sustainability? Well, studies showed that higher consumption of animal-based foods was connected with a higher environmental impact, while high consumption of plant-based foods was connected with a lower environmental impact.

Studies showed that those who followed the healthy eating patterns in the Dietary Guidelines were more environmentally sustainable than diets typically consumed by the larger population. Evidence continues to support the benefits of increasing plant-based foods and decreasing animal-based foods. There’s agreement across all of the studies that evaluated the environmental footprints of different dietary patterns.

Despite the methods of assessing environmental impact, overall, a plant-based diet is incredibly helpful – it’s better for your body and better for the planet.

Excerpted from Life & Health’s upcoming online course, Healthy Eating on a Budget, hosted by Sherene Chou, RD. Subscribe to our newsletter for updates on when the course will be released. 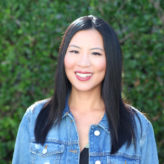 Sherene changed her career in 2010 to focus on wellness and nutrition to help others through food. Prior to her career change, she worked at Hewlett-Packard as a Global Procurement Manager. She moved on to attend New York’s Natural Gourmet Institute for Health and Culinary Arts Chef’s Training Program. She worked as a Plant-Based Chef, cooking for private clients recovering from surgery and chronic diseases, working at vegetable focused restaurants, and seasonally, as a Culinary Nutritionist for New York City’s Produce and Nutrition Education program. Her current role, as the Nutrition Director for L.A. Kitchen, was featured in British Vogue's “What on Earth is Wellness” video series. At L.A. Kitchen, she developed the nutrition curriculum for the Empower program and a pilot program on Culinary Nutrition for Keck School of Medicine of USC. In addition to serving as the Sponsorship Chair for the Academy of Nutrition and Dietetics' VN DPG, she is the lead for L.A. Kitchen on the Teaching Kitchen Collaborative, which was launched by The Culinary Institute of America and Harvard T.H. Chan School of Public Health - Department of Nutrition. She is a proud graduate of USC and CSULA.

P.L.A.N.T.S.: An Acronym Of Hope For Medical Professionals And Their Patients