In my introductory blog post, I talked about how America is malnourished through the very root of the word: mal (bad) nourish (nutrition). Carbs are one of the malnourished areas.

Let’s cut to the chase. Today, there are a plethora of low carb diets that claim that a low carb diet is the best for optimal health. To that, I say, foolishness. Let’s look at the scientific function of our highly debated macro nutrient: the carb.

The true function of carbs

The role of carbohydrates is to provide energy because they are the body’s main source of fuel, needed for physical activity, brain function, and operation of the organs. All the cells and tissues in your body need carbs, and they’re also important for intestinal health and waste elimination.1

Basically, we need carbs, down to our every cell! Carbs are not only important because they’re necessary for energy, but without the glucose that’s formed during photosynthesis we as humans would not be able to survive on this planet, period.

If carbs are good, which kind should I eat?

There are two primary categories of carbohydrates: simple and complex. To break it down, simple carbs are bad, and complex carbs are good. The reason many Americans are sick is that there are consuming far too many simple carbs.

Simple carbs are also calorie dense, meaning you get more calories from less food (by mass).

Complex carbs are whole foods like beans, whole grains (oats, peas brown rice, corn, etc.), fruits, vegetables, nuts, seeds. These foods are turned to sugar much more slowly and the fiber in these foods aid with digestion and elimination.

How much is too much?

The daily caloric recommendation is 1500-2000 calories. The average American eats 3700 calories per day. Americans are carb-malnourished because they are getting the wrong kind and getting way too much of the wrong kind of carbohydrates. When you eat complex carbohydrates the fiber of the whole foods helps to fill you up, but without the high-calorie density.

Okay, so the truth is this:

Part 1: We need carbohydrates for life and for energy.

Part 2: We need to make sure that the carbs we eat are complex carbs found in whole foods—not the simple carbs in processed foods and sugars.

Photo by Sambazon on Unsplash 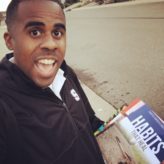