Recently, I went on a mission trip to the Masai tribe in Kenya. I thought that we would be teaching them, what with our advanced Western technology and medical knowledge, but they ended up teaching us valuable lessons.

Before I get to that though, a story. There was an interesting TED talk about some Italian aid workers who came to Africa to help locals farm more efficiently. After planting the crops and watching them sprout up, they were stunned to see hippos come out of the river and eat everything they had just planted.

The locals said, “We knew that was going to happen.”
The Italian aid workers replied, “Well, why didn’t you tell us?”

Their answer?
“Because you never asked.”

The point is, just because you know more technically doesn’t mean you actually know more. 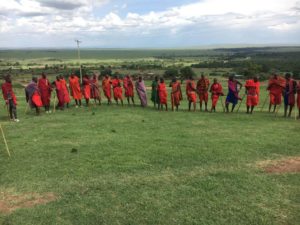 My initial impressions were not that far off. The Masai lived hours west of Nairobi, the capital of Kenya. To get there required over six hours of driving, the majority on unpaved and rough roads. Our drivers called it an “African massage” since you get rather unlovingly “massaged” and tossed around in the vehicle for so much of the drive.

When were arrived, the Masai people were thin as I’d imagined. Most of them were farmers, and many of them were barefoot. There were lots of children running around, and they were looked healthy overall. 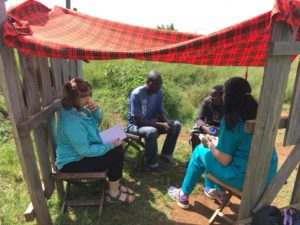 Of the more than 500 patients that we treated, only two had high blood pressure, one had diabetes, and one was obese. The obese patient happened to be our driver, who lived in the city and snacked a lot while driving people around. The majority of complaints were infection-related, both viral and bacterial. Worms were also a big problem due to the drinking water situation, which I’ll get to later.

The Masai walked—a lot. We set up our mobile clinic under an acacia tree and initially, just a few people trickled in. There were barely any houses nearby. But then, people got on their phones and told others that there was free medical, dental, and vision care, at which point people just seemed to appear out of nowhere. There were no donkeys, bikes, horses, or cars. They all just walked over to where we were to get seen. Their level of daily activity seemed to help their overall health as well as their ability to maintain weight.

Their diet was comprised mostly of veggies and beans (I had beans on a daily basis there). Contrary to what I’d expected, meat is a treat over there, not a daily staple. Cows are actually a big deal. The Masai still have a dowry system and the standard is 10-15 cows for a wife. The number of cows you own correlates with your wealth status, which makes the killing and eating of a cow both rare and significant.

Sadly, one of the most commonly known English phrases seemed to be, “Give me sweets.” It appeared that foreign tourists who visited before us had completely corrupted the children’s taste buds. Can obesity and diabetes be far behind? The dentists on our trip were especially frustrated, as they were spending most of their time treating cavities or rotten teeth that wouldn’t have been there if not for visitors from first world nations. What made it worse is that the young patients in the dental clinic were in pain, pain that would have been avoided if they only didn’t eat candy. And who could hardly blame them for eating candy that was brought in by visitors?

This brings up a few important points. 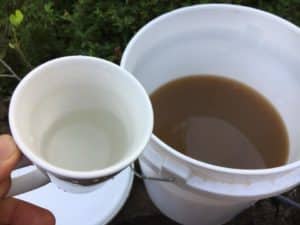 The reason why we focused on this is that Masai drank water that we would barely swim in. It was brown, animals stood in it, dirty clothes were washed in it… It’s no wonder that so many suffered from worms. What was interesting is that they didn’t seem to be concerned about the condition of their water. Their parents, grandparents, and great-grandparents had all drunk it and fared well. The animals drank it and seemed fine also, so why should they be worried?

It was interesting to see their reaction when the water filters changed the brown water to clear water in seconds. Soon, everyone wanted a filter. The camp we were staying in received an onslaught of calls from people asking if they were any more filters. Our translator was actually a bit angry when he saw these filters in action. He asked, “Why is this simple technology just now making it to my people?” Good question. They have smartphones, motorcycles, and Coca-Cola, but no clean water.

The water project was the sustainable portion of our mission. So what if we treated the people for worms? If they drank the same polluted water, they would’ve gotten worms again and fared no better than before. We wouldn’t have done much except make ourselves feel better.

There were two main lessons I got from this.

The Masai quality of life

One the first day we arrived, our camp hosts told us that the Masai people have a very different pace of life than we do. “They’ll want to talk to you,” our hosts said, “They are not in a rush.”

Even when we were haggling at the local markets, the Masai would strike up conversations during and after the negotiations. They would want to keep talking to you even if you didn’t buy anything from them. There wasn’t a big emphasis on outcomes and productivity. Now, that might drive some of us crazy, but isn’t that the problem? The Masai are not stressed. Can you say the same for yourself? Most of us tend to get stressed about this, this, and that, and then get stressed about others not being stressed! I’d say that that’s a bigger problem. 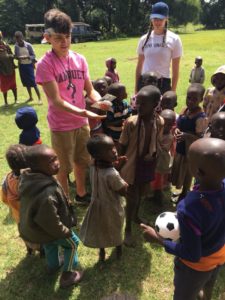 One thing that everyone—including the kids who came with us on this trip—agreed with is that the Masai are generally happy. They are happy with very little. They also show a lot of gratitude for even little things we gave out, like coloring books, crayons, balls, and small toys. They were so happy to get them. To be honest, though, they were happy even before we gave them out. We in the first world are conditioned to think of those
“poor African children.” I suppose it is true to an extent, but the overall reality is that even walking barefoot, wearing poorly fitting clothes, and drinking brown water, the Masai children had huge smiles, played with exuberance and life, and were happy.

There are multiple studies showing that gratitude prolongs life and improves the quality of life. It seems that the Masai have that figured out. We’re the ones who haven’t figured it out yet. We struggle when the Wi-Fi is bad, or if our latte isn’t made the way we like it. How long are we going to allow these first world problems affect us?

Which group is better off?

I don’t know about you, but I’m not happy with the answers above. We may be more “advanced,” but that doesn’t mean we are healthier and better off. There is a lot we can, and should, learn from the people that we thought we were going to help

Dr. Hahn graduated from Loma Linda University in 1994. He is currently the director of the Cardiovascular Fellowship Training Program at the Kettering Medical Center in Kettering Ohio.

What is Activated Charcoal? – A Universal Antidote

What Does Happiness Have Do To With Your Health?

What Is Lifestyle Medicine, And Why Is It On The Rise?