Whenever I go into the pantry of a chef’s kitchen or even a seasoned home cook, I look at the spices that are on the spice rack and my non-culinary self gets a little lost in all the available jars. (When going into a plant-based diet, flavorful food is something that needs to be balanced to have a flavorful taste but not be over seasoned.) These seasonings that are used to add flavor to food might only remind you of the specific taste they give, but what about nutritional value? 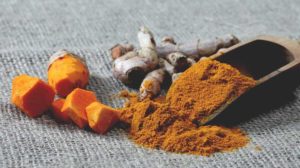 A spice called turmeric is used as a seasoning in multiple cultural cuisines and it shows promise as being one of the most healthfully valuable spices. In the same way pomegranate was used as dye during ancient times, turmeric was also used as a natural dye because of its bright orange and yellowish hue. The natural turmeric plant is used to create turmeric powder, which is obtained by drying the rhizome, an underground part of the plant that is a mix between a root and a bulb.

As a flavorful spice, turmeric has been long used in countless dishes such as curries, soups, desserts, and even drinks. Perhaps you’ve tried a dish with turmeric and simply didn’t know what it was. Thai, Indian and Middle Eastern are a few of the many cuisines that use turmeric surprisingly often.

Turmeric in your food

I first was introduced to turmeric in the delicious form of a spicy yellow curry with vegetables and tofu. Rich flavor from the turmeric mixed with coconut milk made this dish one of my new favorites. You need to try it to know what it tastes like but at risk of injustice, I would describe the flavor as a light gingery taste mixed with a taste akin to ground pepper. 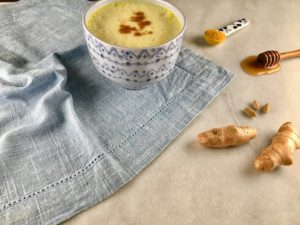 I would suggest looking for restaurants that use turmeric to see what this spice tastes like. Start out with a simple curry or tofu, and after you feel a little braver, try turmeric lemonade or a turmeric latte made with coconut milk. Once you’ve found your new favorite turmeric dish, purchase a jar of turmeric powder at most any grocery stores spice aisle. There are many recipes for any dish you want to prepare, so pick your favorite and try to recreate a masterpiece that the whole family will enjoy.

The dishes that use turmeric will make your menu grow with new delicious family favorites. Curries can be a staple of a household menu because multiple legumes such as chickpea, lentils, black beans, or peas can be used in the dish for protein with turmeric giving the flavor and color. You can branch out and use eggplant or yams as the main item of a turmeric curry dish. Indian recipes use spice mixes called masala that already include turmeric and ginger. The mixed spice dish called tikka masala has become a favorite dish in the UK, attesting to the tastiness of foods that use turmeric.

Turmeric powder can color a variety of foods, like tofu, vegan cheeses, and curries. Use this spice to spice up old go-to rice dishes by making regular white steamed rice into a vibrant yellow rice. Family and guests will love the bright new spin on a classic dish. Because turmeric can be used as a dye, make sure not to get it on your hands as you cook, otherwise, it will stain fingernails yellow.

It’s also fun to make your own mixed turmeric spices. Look around at cultural markets and see if you can find turmeric rhizomes. Then, once you dry them, try grinding them into a fresh spice that you can use and store for later.

The list of health benefits for turmeric use is extensive. Curcumin is the pigment that gives turmeric the orange-yellow color. This pigment also acts as a powerful antioxidant with the ability to reduce inflammation.

Its long history of use in natural medicine shows that turmeric is used for inflamed bowels, gas, and skin care. Cancer-fighting properties are being explored using curcumin as a means to reduce cancer risk by eliminating inflammation that can lead to cancer

There are articles available on Life & Health that speak to the use of turmeric in helping deal with cancer. Dr. Steve Lee shares from the standpoint of an oncologist in a five-part series of articles titled “Understanding Cancer”, where he educates about prevention to treatment of cancer. An additional article titled “Foods that Fight Cancer” by registered dietitian Dr. Winston J. Craig talk about many different cancer-fighting foods, including turmeric.

Feeling ready to try cooking with turmeric? Start with Life & Health’s recipe for Masala-Spiced Chickpea & Cauliflower, from our Plant to Plate cookbook.

Get Relief From Anxiety With These Natural Remedies

How To Use Essential Oils For Natural Pain Relief