The need to find an escape from the pressures, hardships and many times the cruelty of life, is something that resonates with many of us. And then, when an escape seems inconceivable, it often lends itself to the making of poor, regrettable and destructive choices.

What happens, when you come from a “previously disadvantaged community”? This is the official term used to recount individuals and communities who suffered degradation under the Apartheid Era of South African history. What do you do when most of your friends have turned to drugs and alcohol abuse? How about when it’s normal for you to live surrounded by gang violence? On top of all of this, what do you do when you also have a disability of which the symptoms are consistence to that of Foetal Alcohol Syndrome (FAS) and Down syndrome?

This was a day in the life of 27-year old Chad Geldebloem. Growing up, he struggled with difficult learning abilities, brought on by his poor sense of hearing, speaking and coordination. He always battled to adjust socially; therefore when challenges of peer pressure entered into his life, he quickly became a statistic.

Providentially however, Chad had some positive influences in his life. His sister, Fiona, would often invite him to come to church with her. Slowly, Chad began to make Christian friends in his neighborhood and discovered something he had never had: peace, hope and acceptance. He soon decided that he needed a life change. He gave up drinking alcohol instantly, but battled with smoking. He had heard that exercise could help to stop bad lifestyle habits and so he decided to do something about it.

Astonishingly and without any help, Chad decided to build his own training weights. Using 2×25-liter paint buckets filled with concrete and a pole running between them, he had a bench press facility. With a couple of large bricks, held up by some wire, he had a pair of dumbbells. Chad would often be seen running and exercising in the public park, unperturbed by the real possibility of being caught between rival gang crossfire. 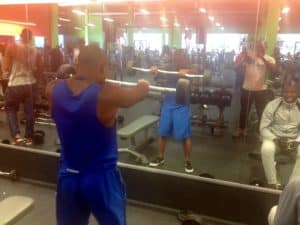 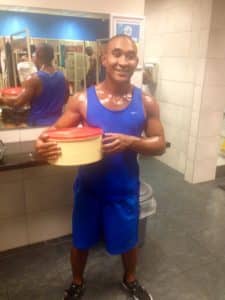 5 days a week, Chad walks 3 km to the gym, carrying his bag and his mother’s baking container. He uses it to mix nutritional whole cereal with water for his post workout meal.

Where He Is Now

It was incredible to witness Chad’s body transform. His confidence was up and he was looking and feeling great.  He had met his ultimate goal of breaking his smoking habit, and now he discovered that his body only craved healthy food. Noticing his dedication to health and fitness, Chad’s mother, with her small monthly budget, got him a gym membership. She’s also taken steps to make positive lifestyle choices in her own life! I asked his mother what she thought of Chad’s new lease on life. With a catch in her throat, she said, “ I am very proud.”  She then jokingly added, “Hy eet my net bangkrot.” (Translated from Afrikaans, this means, “ He’s bankrupting me with his huge appetite!)

Chad found a positive path out of destruction through health and fitness. He confesses though, that his greatest path is through his newfound faith in God. Now, he stands tall as an inspiration and role model to his peers and community at large.

His story reminds us that the journey to health is just a decision away. Health can be attained through our choices–we can either succumb to life’s challenges or, like Chad, give ourselves an opportunity to live life, and live it abundantly.

Eric Mudoni has a key education and marketing role at Rejuvenate X360, a Cape Town-based recovery and lifestyle center. He loves to connect with people from all walks of life and advocates a balanced lifestyle which he believes incorporates the following: faith, family, health, and fitness. Eric is also a member of the F5 Challenge team an is the director of F5 Challenge South Africa. F5 Challenge is an organization that seeks to enrich the lives of others through the use of fitness and fellowship in a faith-enriching environment.